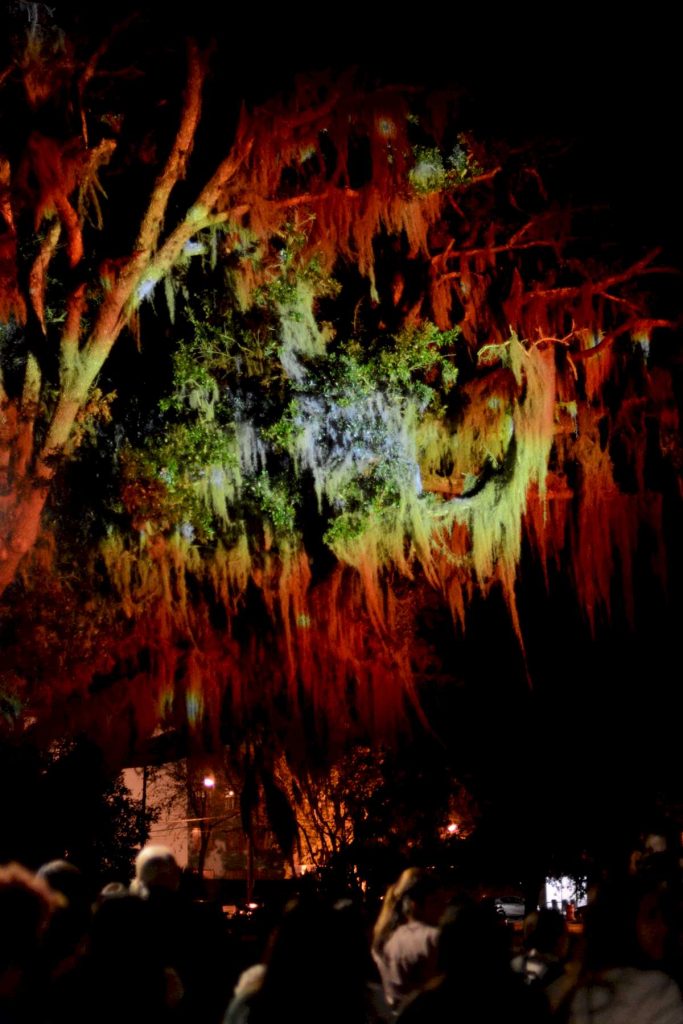 On Nov. 17, internationally acclaimed artist Naziha Mestaoui unveiled her Live Oak Tree of Life artwork in Innovation Square alongside scientists and leaders of the University of Florida and Gainesville communities.

The work, a light projection of the Tree of Life displayed on a live oak tree, was created to celebrate Earth’s rich diversity of animals, plants and microbes represented by the immense network of relationships that links all living things.

The plan included an initiative to reinforce the relationship between UF and the city of Gainesville. The university sponsored a grant to the College of the Arts to identify impactful ways to share the arts with the city.

“One thing I love about this project is the fact that is captures the intangible,” Lane said. “So many discussions around our Strategic Development Plan revolve around physical development, but the underpinning spirit behind this project is not something you can touch or feel. It’s something almost indescribable.”

Upon receiving the grant, College of the Arts Dean Lucinda Lavelli immediately began working on finding a symbol that would capture the creative energy of the city and university.

Lavelli choose Innovation Square as the location for the artwork because it is almost exactly equidistant between downtown Gainesville and the University of Florida, binding the two epicenters of the city.

With the grant, Lavelli collaborated with the Florida Museum of Natural History that had commissioned Mestaoui for its Tree of Life celebration.  The artist’s work is noted for combining artistic expression and technology with environmental concerns to inspire social change.

Mestaoui said that she was reading up on genetics when she was contacted and was already full of ideas.

Since her journey to the Amazon rainforest where she lived among aboriginal peoples, Mestaoui has developed a connection with trees. She explained that the natives understand each tree as a living organism; they can exchange thoughts and ideas with trees in a form of communication.

This inspired Mestaoui’s idea for a live Tree of Life projection.

“They are not just wood,” Mestaoui said. “They are sensitive, living beings that feel all that is around them.”

Mestaoui worked with a composer to transform the genome that is common to all life on Earth into music. The amino acids from this common DNA sequence were translated into notes to make what Mestaoui called the Symphony for Life, which she used to accompany the projection. Other rhythmic sounds in the composition were inspired by the pulsing that all living organisms have.

The Live Oak Tree of Life was only one piece of the larger One Tree, One Planet event series hosted by the Florida Museum of Natural History, which included a second projection by Mestaoui on the back of the Harn Museum of Art and a short, animated film by James Oliviero and his team at the UF Digital Worlds Institute.

Mestaoui’s projections of the Tree of Life were the result of work by Doug and Pam Soltis, distinguished professors and scientists at UF and the Florida Museum of Natural History. The two were principal investigators on a team of scientists that assembled the most comprehensive Tree of Life created, mapping the shared evolutionary history of and relationships between all 2.3 million species that have been named so far on the planet.

The artwork for One Tree, One Planet is an extension of Mestaoui’s work One Heart, One Tree, which was projected on the Eiffel Tower at the United Nations Climate Change Conference in 2015.

“It’s all about connectivity and understanding that we are a part of something bigger,” Mestaoui said. “We are not at the top of a pyramid. We are a part of a network where every living organism is important.”

Doug and Pam Soltis said Mestaoui’s work is a powerful metaphor for understanding all of biodiversity.

Doug and Pam Soltis emphasized that there is still so much left to do to understand the diversity of life on Earth, especially in our current times. They said that the Tree of Life is under threat with extinction rates at 1,000 times normal, making conservation efforts more important now than ever.

Gainesville Mayor Lauren Poe also attended the illumination of the Live Oak Tree of Life. He emphasized how our biodiversity is essential to us being alive and being part of the planetary community. It also serves as a metaphor for the Gainesville community, he said.

“It’s our diversity as a city that makes us who we are,” Poe said. “It’s not only important, but our lives depend on celebrating that diversity and making sure that every single element of our community is served equally in our quest for the pursuit of happiness.”

All those that worked on this innovative combination of art and science hope to bring together the community and further the understanding of biodiversity.

The projection will be on permanent display in Innovation Square starting in the new year.

A full live video of the reveal and projection from Nov. 17 can be viewed here.

This story originally appeared in the UF College of the Arts’ In the Loop newsletter.